Here is a look at the US trade deficit since 1998: 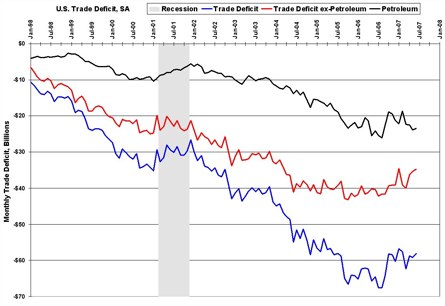 It appears that the monthly trade deficit bottomed in July 2006 and has been improving since then. This is evidence that the US economy has been slowing relative to the rest of the world and the falling US dollar has made US exports more attractive.

If the US economy continues to deteriorate, as I expect it will, then the Fed will significantly reduce interest rates, causing the dollar to fall further and the trade deficit to continue to improve. This would be bad, of course, for America’s largest trading partners such as China, Japan, Canada, Mexico, and Germany. But it may help to keep the US from a protracted and severe recession.

The one wild card in all of this is energy prices. If the prices of oil and natural gas surge higher then the overall trade deficit could actually increase even in the face of a decrease in imports of manufactured goods and a rise in exports.

I am in the camp that believes the US will soon enter a period of economic stagnation or recession, which will significantly cut growth in most parts of the world. To elaborate, I am posting the following excerpt from the recent Quarterly Review and Outlook, Second Quarter 2007 from Hoisington Investment Management:

It is incorrect to believe that the rest of the world is strong enough to boost our exports and keep our economic activity on an even keel in the face of a slowdown in U.S. consumer spending. Importantly, real exports constitute only about 11% of economic activity, versus 68% for real PCE. Thus, a massive lift in exports would be needed to keep the economy expanding in the face of consumer retrenchment. However, the statistics and economic history suggest that world growth causality runs from the U.S. to the world, not vice versa. The World Bank provides a breakdown of world GDP in real terms (Table 1). 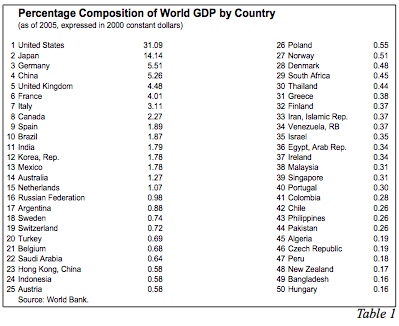 At present, the world is a mix of rapidly growing and significantly underperforming economies, with the BRIC (Brazil, Russia, India, China) countries on the high growth side and Japan, the United States, and those closely aligned with the U.S. on the slow side. The rest are largely somewhere in between these strong and weak groups. The United States accounts for 31% of world GDP with Japan next in line with 14.1%, meaning these two countries account for 45.2% of total world output. The BRIC countries, on the other hand, control 10% of global output. Although Mexico and Canada diverge from the United States over shorter intervals, over the long run they are tied to the fortunes of the United States. Adding those figures to the United States and Japan boosts the total to 49.3% of global GDP, a figure that easily rises to about 50% if one takes into account the Latin American countries influenced more by the United States than any other country.

But even this analysis is not a complete description of the impact of the United States on the global economy. A main source of Chinese growth is their burgeoning trade surplus, most of which is with the United States. According to official Chinese figures, the Chinese had a record trade surplus for the first half of this year of $112.5 billion, with $73.9 billion or 65% with the United States. U.S. records indicate that its deficit with China is bigger than the official Chinese figures show. The boost to Chinese GDP is even greater when one takes into account the foreign trade multiplier, or indirect economic effects. It then becomes clear that the Chinese trade surplus against the U.S. has been a powerful stimulant to their economy. They will indeed feel the slowdown in U.S. consumption. The U.S. trade deficit also plays a major role in domestic economic growth for India and Brazil, not to mention Europe.

Econometric studies provide important insight into the global impact of the U.S. economy. These studies have shown that U.S. imports increase $2 for each $1 rise in income, but that U.S. exports go up just $1 for each $1 gain in foreign income. Thus, when U.S. consumption is accelerating the world economy is a major beneficiary, but when it slows, as it is now doing, the rest of the world will lose forward momentum. This relationship explains why U.S. domestic demand leads the domestic demand in the large foreign economies by six to nine months (Chart 3).

In the second quarter real domestic final sales slumped in the United States and U.S. imports fell, aligning with the econometric studies. Industrial production has contracted for three straight months in Japan, and Germany registered a net decline over the past two months. Thus, the process of transmitting U.S. weakness to the rest of the world has begun.

Investors holding foreign stocks hoping for protection from a US economic contraction might be disappointed.

Since many Asian countries devalued their currencies in the late 90’s, it has been much cheaper for US consumers to buy goods and services from Asia rather than from domestic suppliers. Currently, the US imports almost double of what it exports. If Asian exporters were to use their US dollar proceeds from sales and exchange it for their own currencies, their currencies would rise in value against the US dollar until trade between the countries balanced.

Instead, Asian central banks are currently intervening in foreign exchange markets by purchasing dollars from exporters at a rate that significantly undervalues the domestic currency. In effect, more domestic currency is being printed and traded for each dollar exporters earn than would have been the case had the foreign exchange market been more flexible. This causes the money supply in Asian countries to expand at a much faster pace.

Asian central banks use the dollars they have received to buy US-denominated assets, particularly debt. This has put downward pressure on US interest rates and stimulated greater lending, thereby increasing the money supply in the US as well. Much of the borrowed money is spent by US consumers to purchase more goods from Asia, resulting in a continuous cycle of money creation. Greater liquidity in Asia and the US spills over into other regions of the world via investments and trade causing liquidity to rise everywhere.

I outlined the effects of a potential unwinding of the yen carry trade in strengthening the yen, and weakening all other currencies and assets worldwide such as equities, real estate, commodities, gold, art, etc.

The unwinding of the US trade deficit will cause the US dollar to depreciate relative to Asian currencies such as the renminbi and yen. Also, declining liquidity will cause asset prices to fall. However, the US dollar gold price should do very well due of its inverse relationship to the US dollar.

What will cause an unwinding of the US trade deficit? One possibility is a slow down in US consumption arising from a collapse of the housing market. A robust housing market was integral to the economic recovery since 2002 creating employment and allowing households to cash-out their rising home equities. However, housing starts and home prices have been falling in the last year. This will eventually negatively impact the employment market and mortgage equity withdrawals causing consumption to decline, too.

Another possibility is Asian central banks, namely China, reducing their US dollar purchases in response to intense pressure from Washington. US interest rates would rise as a result, making it difficult for a debt-ridden US consumer to stay solvent.

I want to add that although I am forecasting global monetary deflation in the near-term, I believe inflation will prevail in the long-run. Central banks will be forced to combat any sort illiquidity by running the money printing presses at full steam leading to a period of stagflation. In the mean time, however, be prepared for tighter money. 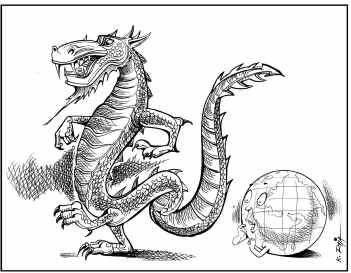 The Chinese growth story has received an enormous amount of press in recent years. Indeed, after a lull during the late nineties, China’s economy began to accelerate growth in 2002 and has been averaging 10% since then. It is now the 4th largest economy in the world after US, Japan and Germany.

There were two factors that triggered the economy’s emergence in 2002. First, China joined the WTO just a year earlier. Second, US consumer spending started to rebound after a brief recession. As a result, Chinese exports which were already high began to sky rocket.

The US is China’s largest export market accounting for 60% of its total exports or 6% of GDP growth. But we are now starting to see the US economy slow down. If the U.S. were to fall into a recession, how much of a negative impact would this have on China? Not much if you listen to the China bulls who argue that it is internal demand that has been fueling China’s growth.

Though consumer spending has been growing, it has not kept pace with export growth. The following graph depicts consumption’s declining share of the economy: 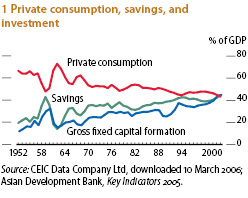 Also note from the graph that capital investments have surged along with exports and now constitute the largest source of demand for the economy. But most of these investments have been allocated to building infrastructure to expand the manufacturing sector. Therefore, China’s investing boom is dependent on a healthy export environment. A decline in exports would lead to overcapacity, lower profits, and widespread bankruptcies.

The bottom line is that China has become the manufacturer for the US. Trade between the two countries has reached an unprecedented level and both are very dependent on each other. China needs healthy consumer spending in the US to keep its factories busy. The US needs China’s cheap goods and savings to finance purchases.

But when the US eventually falls into a recession expect China’s growth of exports and investments to decline. The economy will decelerate to low-single digit growth or, possibly negative growth. However, China’s huge foreign exchange reserves should serve to cushion the economy from any protracted slowdown.

Though I am bearish on China for the next few years, I am bullish in the very long term. The government’s economic liberalization is at an early stage with many reforms still needed. In the coming decades, China should experience greater growth than the West. In fact, 50 years from now don’t be surprised to see China enjoying the same status in the world as the US does today! But for the time being my money is out of China.

Recently the yuan has picked up its pace of appreciation against the U.S. dollar. Over the past week, the yuan has appreciated by 0.5% against the dollar and its current rate of 7.90 is the highest since its revaluation in July of last year. I believe this is setting up the stage for another revaluation before the end of the year.

Senators Charles Schumer and Lindsey Graham had planned to introduce legislation that would impose a 27.5% tariff on Chinese exports to the U.S. After meeting Treasury Secretary Henry Paulson they said they may delay pushing a vote for the time being. What could Mr. Paulson have said to them to have caused their shift in position? I believe the Treasury Secretary has received assurances from Chinese officials that they will soon revalue the yuan again.

China no doubt, understands the consequences of the proposed tariff. If it keeps the exchange rate fixed they would have to pay 27.5% of the value of its exports to the U.S. government. On the other hand, if China was to revalue its currency by 27.5% it would not have to pay tariffs to the government and the costs of its imports would decline by 21.4%. The impact on demand for Chinese goods under both situations would be equivalent. Obviously, China is better off revaluing.

China realizes that if they do not cooperate with the U.S. the legislation will eventually get passed and, therefore revaluing the currency very soon is their best option. I don’t expect the yuan to be revalued by 27.5%, but it will be more significant than the last revaluation.