Gold hit a 27-year high last week in response to the Fed’s 50 basis points cut which showed that the central bank was more concerned about economic growth than restoring confidence in the US dollar. The economy is on the path to a recession and it looks like the Fed and the government will do everything in their powers to prevent it, and in the process, devalue the dollar against other currencies and gold.

Earlier in the year, I was a net seller of gold stocks (as discussed here and here) due to my fear that a liquidity crisis would soon develop and all assets, including gold, would endure some short-term weakness. The liquidity crisis did occur, and though gold held up well, junior gold explorers have declined by 30% to 50% since August. While I am still pessimistic on a significant rebound for bonds and equities, gold should see gains thanks to the Fed’s expansionary monetary policies.

I have now started to increase my position in gold juniors and will continue to do so in the coming weeks until I am fully invested in the sector again. The gold price may pullback, but the gold juniors have been beaten up so badly that a lot of the risk is gone. I am more confident than ever that we will see $1000 gold within the next couple of years and I want to position my portfolio again to benefit from that. 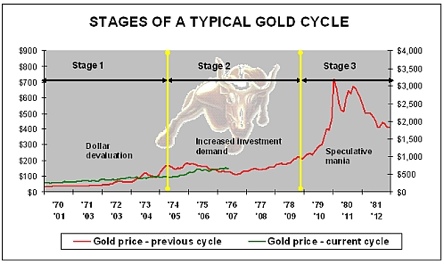 At this point, the current cycle remarkably resembles the price movements of the previous cycle. The gold price could stagnant at the current level for the next year or two and still remain on course for the spectacular gains precious metals enjoyed during the 70s.

This possibility is consistent with my bearish intermediate-term, but bullish long-term outlook on gold. Gold bulls need to keep in mind that no bull market goes up in a straight line and corrections can be severe and plentiful.

This year I have been a net seller of gold stocks for fear that gold has entered a mini bear market within a secular bull market. The US is clearly slowing down and the trade deficit, which was the main culprit for the surge in global liquidity, has recently started to improve. If liquidity growth slows down then all assets which had benefited from it previously will begin to suffer.

The only gold stocks I have remaining in my portfolio are those which I would be happy to see decline in price so that I can buy more and reduce my average cost. I am also shorting some stocks for hedging purposes.

If a liquidity crunch does arise, you can be sure that at some point the Fed will begin cutting interest rates. This will cause inflation to accelerate, the US dollar to drop, and the gold price to enjoy its next leg up to $1000 per ounce.

Clearly we are in a world flush with cash. This has resulted in strong asset prices almost across the board. However, liquidity could suddenly dry up very quickly leading to a downturn in asset prices. Likely triggers for this occurrence are a further slowdown in the US economy or the unwinding of the yen carry trade.

Gold, too, has benefited as can be seen in its recent strength even though the US dollar has been stable. I have made the case before that gold should perform inversely to the US dollar. This relationship may breakdown from time to time but not for long. The abundance of liquidity has encouraged financial institutions to buy a wide range of assets. If liquidity were to dry up, then the same assets that were purchased before could be sold, including gold.

Don’t get me wrong — I am still very bullish on gold in the long-term. On the first sign that the global economy may sink into a recession, central banks around the world will run their money printing presses on full steam. The money supply will explode similar to the 70’s causing asset prices to resume their uptrends, with gold enjoying the greatest rise.

However, caution should be exercised in the near-term. Now is a great time to liquidate assets. I recently took profits in a number of my gold stocks. Currently, I have 70% of my portfolio invested in the gold sector, 10% short on brokers and small cap stocks, and 20% in cash.

I have been bullish on gold for several years now. Even though the gold price has had a tremendous run from $260/ounce in 2000 to its current price of $615 the underlyng factors responsible for the rise remain present. Because of this I am fully invested in gold even though I have already made a lot of money.

My current target price for gold is around $1000/ounce. I am not sure exactly how long it will take to reach that price, but it should happen before the end of this decade. So if you were to buy gold right now for $615 and sell it 3 years later at $1000, you would have made 63% or 17.5% compunded annually. And you would have made much more than that if instead you had bought shares of gold mining companies with leverage to the gold price.

Now let me explain why the gold price will increase to $1000. When most analysts make predictions about the gold price they talk about jewelry demand, producer hedging, central bank sales and mine supply. However, when one charts the relationship between these factors and the price of gold no relationship can be found. Rather, it is currency exchange rates that influence the price of gold.

The chart shows a very strong inverse relationship between the US dollar gold price and the US dollar exchange rate measured against a basket of major currencies. An obvious explanation for this is that since gold is quoted in US dollars, when the US dollar weakens more of it will be required to buy the same amount of gold.

This makes sense since gold has historically been considered money and, therefore, is affected by exchange rate changes like other currencies such as the Euro, Yen and Pound. Gold does not respond to supply and demand factors like other commodities and this is why most analysts make incorrect forecasts about the gold price.

To correctly forecast the theoretical US dollar price of gold we need to measure the inflation rates of the US dollar and gold. Paul Van Eeden has measured both and comes up with a theoretical price of $700/ounce (now updated to over $900/ounce). Moreover, if the US suffers a recession, as I expect, then the Federal Reserve will pump liquidity into the economy which will cause dollar inflation to accelerate and the theoretical gold price to rise beyond $1000/ounce.

In conclusion, the current gold price of $615/ounce is much less than its theoretical value of over $900/ounce. Since gold is so undervalued it is the safest investment I am aware of and it is where I have deployed most of my capital.